Is Grindr Turning You Into a Mindless Shag Zombie

This article was first featured in Attitude magazine in September 2017, but they took it down off of their website after 90 days, so I'm posting it below. 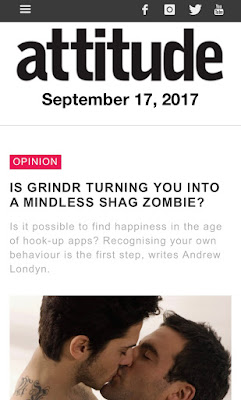 As you’re getting ready to leave his house, you don’t say much. You just put your clothes on and collect your belongings.  He hasn’t suggested meeting again, so you don’t either – why risk getting rejected?  As he closes the door behind you, you walk away feeling slightly dejected.  In theory, you won.  The Grindr gods smiled on you. You just hooked up with a hot guy, but as you walk away alone, that ache in your heart begins to resurface.

You ask yourself “What was that about? Why did I do that?” The endorphins that were running through your veins moments ago are quickly dissipating; they’re replaced by an ever-growing gnawing feeling of emptiness.  Small voices of anxiety become a din, as you realize you’re no better off than an hour ago.

You try to argue with the voices “I just got a super hot notch on my belt.”  But the empty feeling is still there; you can’t rationalize it away as you walk alone down the street in the middle of the night.

You open your phone, hoping it provides you with a distraction.  The guy hasn’t texted, and you’re too afraid to text him, because it would make you look desperate.  And then you see it – the app that got you there in the first place.  That yellow mask with the black background – or is it a skull? Should you open it?  “If the guy sees me online, he’ll think I’m a slut,” you tell yourself. But then you realize that if he’s not interested in seeing you again, you might as well find someone who is.  You press the button and log on, this time, hoping that someone who can help you make the incessant void feeling go away – maybe a hot guy who can appreciate your heart as well as your junk.

No such prince charming has presented himself, but someone did send you a cock pic.  “Hey, at least it’s a big distraction,” you say to yourself, smirking.

If the above passage resonates with you, you may be a mindless shag zombie and not even know it.  A mindless shag zombie is the type of guy who just roams the app-sphere looking for new flesh to consume.  They’re not open to a committed relationship – or they’re certainly not willing to expend any effort or take any risks.  At one point, this zombie was alive and in love, but he got hurt.  Terribly.  And so he vowed to do anything and everything to avoid getting hurt again, but all he did was just make himself hopelessly cynical and emotionally unavailable.  This is what I call the vicious cycle of sluttiness and cynicism, which leads to an emotional death of sorts.

In constantly trying to stay safe, all that’s left is chasing after the hottest photo you can obtain with minimal effort.  But each time you hook up, your feeling of validation feels less of an achievement and more of simply going through the motions – literally.  And after a while, that’s all you have: empty motions, which now serve to exacerbate your negative feelings.

Now I’m not saying that you can’t be sexually liberated.  Sex is a natural part of life. But all too often, these apps create a structure whereby our community only caters to its basest instincts with no emotional connection or personal growth.  Some people want relationships; others don’t, but everyone feels trapped.  And that’s why I wrote Grindr Survivr: How to Find Happiness in the Age of Hookup Apps.

It’s easy to point the finger at the mean, nasty gays on these apps, but if we’re truly going to make these apps safer spaces for our community, you’ve got to start with yourself first. Yes, I’m aware that numerous gay guys have wronged you in the past, but you’re ultimately responsible for not becoming an emotional zombie.  The fact is, several amazing guys probably presented themselves, but you were too emotionally incognizant to appreciate them.

While you can’t control every hot asshole out in cyber space, you can do some soul searching and stop lying to yourself (and to others) when it comes to identifying what you’re committed to having in your life (whether it’s a relationship or not).  You can get new insights into how you might be sabotaging your love life, and you can live by a higher moral code than what you’ve been doing previously, not to be self-righteous, but because it’s far more empowering than doing the same empty motions again and again.   You’ve done that ad nauseam, so it’s time to deal with the empty feelings rather than just distract them.   As Michelle Visage always says “Getting filled and being fulfilled are two totally different things.”

Andrew Londyn is a lawyer, PR Consultant, and author of Grindr Surivr: How to Find Happiness in the Age of Hookup Apps.  He can be reached at @grindrsurvivr
Posted by GrindrSurvivr at 6:37 PM No comments: