Okay... So thanks to Amazon's amazing self-publishing service, yesterday I launched the Kindle version of Grindr Survivr: How to Find Happiness in the Age of Hook-Up Apps. 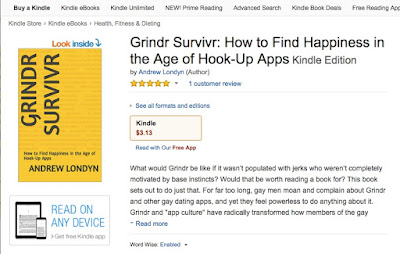 If you're in the United States, the link is here:
https://www.amazon.com/dp/B06XVHQGDT

And if you're in the United Kingdom, the link is here:
https://www.amazon.co.uk/dp/B06XVHQGDT

This book is an amalgamation of my 10 Grindr Commandments, and it also includes a detailed analysis of how Grindr is impacting and transforming the gay community and app users.  It also includes tips and recommendations for first dates.

For the life of me, I don't know why Amazon has classified this book under "fitness and dieting"... I'm trying to tweak the description and the settings to get it placed into the dating/romance category, but there are always bumps in the road.

To celebrate the book's release, I'm selling the book for $2.99 (£2.49), which is the lowest price Amazon will allow you to sell an eBook.  The price will be going up to $4.99 in a few weeks, and then $6.99 a few weeks after that, so feel free to buy the book now.  Grindr Survivr is 235 pages, so it's a real book!  Maybe that's even a tad long, but don't worry, there are photos.  I really wanted to delve into the issues of what's stopping Grindr users from finding relationships or making meaningful connections.  And I didn't want readers saying "Good book, but he didn't tell me how to get [fill in the blank]."

I am actively exploring getting a paperback version published, but that will take another 3-5 weeks. But given the realities of self-publishing and printing, I'm estimating that the physical book will be around $14.95.  So the ebook is definitely cheaper.

The book description is here:

What would Grindr be like if it wasn’t populated with jerks who weren’t completely motivated by base instincts? Would that be worth reading a book for? This book sets out to do just that. For far too long, gay men moan and complain about Grindr and other gay dating apps, and yet they feel powerless to do anything about it. Grindr and "app culture" have radically transformed how members of the gay community interact with each other, and while finding “dates” has become easier, it seems as if finding anything of substance has become near impossible.

Well, it’s time to stop complaining and do something about it. Grindr Survivr is designed to give readers a guide on how to find happiness in the new age of dating apps. This book gives readers a thorough understanding of how Grindr is changing the gay scene, and by extension, how such apps have changed each of us as individuals. Often, we aren’t even aware of how deeply we’ve been changed by these apps, but we can’t expect a different result until we look at ourselves, our community, our behavior patterns and resolve to transform all of them. Grindr Survivr is divided into three parts. The first part discusses exactly why and how Grindr has changed the gay community, and how such apps make us both super picky and very cynical.

The second part, which is probably the most important, discusses the “Gay Commandments” that every gay man should live by if he wants to find relationships of substance (or even merely stop suffering and worrying about what happens online). The Gay Commandments aren’t preachy at all, but rather they are a call to interject a moral baseline into online behavior – but all the while the author gives honest and humorous anecdotes from his own personal dating experience. He’s not afraid to reveal his own failings in order to help readers learn from his mistakes. The Gay Commandments also include numerous “action points” that are designed to empower you to take new and different actions that will give you new results (rather than just stating an overwhelming problem and not giving you anything to do about it). Readers will laugh and see themselves in the author’s unique and wry perspectives on gay dating.

The final part of the book contains basic tips, guidelines and recommendations for online behavior and first dates. It contains help in spotting fake profiles and contains a veritable list of do’s and don’t’s for early dating. It’s what you might expect in a regular dating book, but in Grindr Survivr, it’s merely the third part of three.

Whether people want to admit it or not, dating apps are here to stay. They are changing everyone who uses them, so it’s time for a group of committed individuals band together and decide to push for new conversations and ways of behaving that will dramatically alter how the gay men interact with each other. There aren’t enough thought leaders out there pushing to transform how people treat each other on apps, and so this book is designed to help users start a dialog to change this, while empowering them to take new actions that make them more content and satisfied with their online dating experiences.
Posted by GrindrSurvivr at 6:24 AM No comments:

A "Grindr Survivr" Book Is Coming!

So for some time, I had wondered whether my blog postings might form the basis of a book.  I have no idea if people were enjoying my blog posts or whether they were making a difference.  But nevertheless, I want to do more writing, so I took the plunge, and I carved out a significant amount of time to expand on all of my posts, and I've completed a rough draft of my book on Grindr and online dating.

I added a lot of new insights in the hopes that people really see where I'm coming from and that people will see themselves more in my own writings and experiences.  I also added a lot of techniques and exercises for readers to do at home.  That way people can actually grow from the book rather than just read it, agree with it, and then put it down and have nothing change for their lives.  I want all of my readers to get value out of the book, but that requires saying things that prompt readers to try new things. 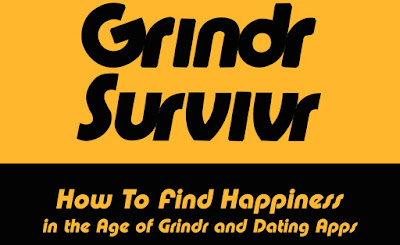 The sub-title may change somewhat, but the main title will probably stay the same.  Also, since I want to keep some of my key insights and advice exclusive to the book, I've taken down about half of my posts on here.  I've left enough for outsiders can get a sample of my writing style, and they can see what's in the book.  But I promise that I will keep the book reasonably priced and affordable.  I appreciate everyone who's supported me in this endeavor.

Posted by GrindrSurvivr at 11:10 AM 2 comments: