The Gay Commandments - #1 Don't Be a Douche 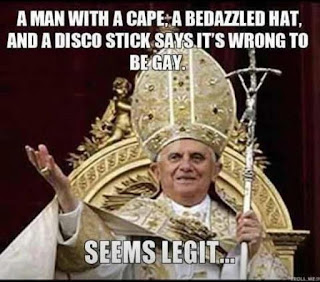 Introduction: Why We Need Moral Conversations!

I'm not religious.  But there is some value to religion in that it gives human beings a forum to debate morality and/or how we should treat each other.  The problem with gay guys is that because religion has by and large abused us, we have just stopped having these types of conversations.  As a result, we’ve thrown the baby out with the bathwater.  In one sense, religion – in its most formal and rigid sense – may have outlived its usefulness.  But there is a risk when we throw out the main vehicle by which humans question our own behavior and morality.

The risk is that gays might become increasingly amoral.  That’s not to be confused with immoral.  But rather the “I don’t care” attitude perpetuated by Grindr and other apps is making us all very blazay about how we treat each other.  Amoral means without morals.  Immoral means having bad morals.   Quite rightly, we don’t need someone telling us that we’re going to hell for being gay, but maybe we need someone asking to question ourselves and pushing us to grow as human beings and as a community.

And I've been waiting for years for Lady Gaga, Elton John – or maybe Karen from Will and Grace – to come down from a mountain top and declare that gays have a new set of commandments to which we should all adhere. But alas, it hasn't happened.  So, I'll give it a go...

Who am I to propose such strong prescriptions for human behavior? Nobody important…  Yes, I’m smart; I’m a lawyer.  I have a background in philosophy and examining how humans behave.  But I’m not ballsy enough to say that God sent me here on a mission.  And I don't have any celebrity status to bolster my claims.

I’m just a normal guy who is out there trying to get people thinking, and if my ideas have merit, then hopefully, people will reflect on them and find what’s applicable to their own lives.  It’s my hope that as I share my ideas, other people may engage in these types of conversations, and people will begin to develop their own intenal code or commandments by which they will live.   So these are my recommendations as to how gay men should live, but feel free to comment, change or adapt them to fit yourself.

That being said “Gay Recommendations” is no where near as catchy “Gay Commandments. “ So here we go.   I have no idea if I’m going to have 10 Commandments or more.  But as I think and develop the ideas, I’ll drop them on here. 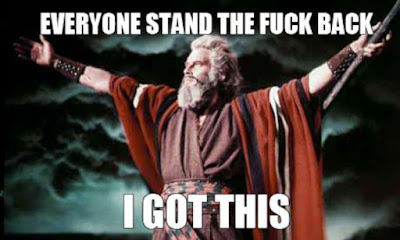 I.  Thou Shalt Not Be a Douche

This is the most obvious.  Everyone reading this is likely thinking "Well, of course."  And yet, it's the one that is at the greatest risk of being violated as gays are overwhelmed with choice and online manners go out the window.  As people get more and more messages on Grindr and other apps (ie, they're hot and people fancy them), they just give up caring about how they act or how they treat people.  And as there is no consequence to acting like a shit head, people just do.

Most people reading this can think of one time that they were a douche bag to someone for no reason.  Maybe you were having a bad day.  Maybe you thought the guy messaging you was “not being realistic” in messaging you.   But we’ve all done it.  But in a way, being attractive is a form of power.  And in typical corny geek fashion, I’m going to quote Spider-Man: with great power comes great responsibility.

You have the power to hurt people.  You have the power to ruin their day or make them sad.  Yes, it’s just Grindr.  And yes, people shouldn’t take it personally.  But you have no idea what the person on the other side of the app is feeling.  You have no idea what they’ve been through or where they are in their own journey of self-acceptance.  Now honestly, do you want to be the type of person who uses their attractiveness to hurt people who took time to try to get to know you?

By the way, if a bunch of excuses are jumping into your head right now giving you reasons to ignore this advice, then that’s how you KNOW YOU’RE A DOUCHE.  Stop making excuses and start recognizing people’s humanity.  Just because you’re cute

Even if a guy is not your type, you don’t have to be rude and disempower them.  You don’t have to try to “get off” by rejecting them.  Other people are more sensitive than you are.  It may have taken them a lot of effort to get up the confidence to chat to you.

It’s in your own self interest.  You never know when/if you will bump into people who have been rude to you in the real world.  You may have forgotten them, but they won't have forgotten you.

Personally, I always ignore or block people.   I don’t make them go through the “false hope” of seeing that they’ve received a response from a hot guy only for it to be dashed with a message like “Thanks but you’re not my type.”  Trust me.   That roller coaster of a ride of two seconds sucks.  And let’s be honest, guys who send those message – whether they admit it or not – are secretly getting off on rejecting other people.

And for God’s sake, do NOT tell them why you don't fancy them.  I'm shocked at how rude gay guys are.  It's bad enough to send someone a message saying "Not interested sorry." But don't tell them off, because they're not pretty enough, or don't have a hot enough body.  And certainly don’t abuse people or put them down because of their race or ethnicity.  This goes without saying, but I’m shocked at how easily people just say horrible things on Grindr and other apps.

It costs nothing to be the bigger person online or to show some grace when you have to let seomone down.

THINK BEFORE YOU WRITE!

Will you inevitably have slip ups, get mad, or have moments where you just forget and you say something stupid?  Of course.  But better that you’re working on it and minimizing those mistakes than actively encouraging them day to day.

If someone tells you that you're an ass-hole or a jerk, our first instinct is to give ourselves good reasons for acting like a jerk.  "Well, he was rude first."  Or...  "He doesn't know me."  Sometimes these reasons are good and sometimes these reasons are full of crap.  Here's a really easy way to test whether your behavior was obnoxious.  (Incidentally, no one I've shared this challenge with has ever had the balls to do it.)

2) Describe the situation, but REVERSE THE ROLES.
So if someone said that you acted like a jerk on the first date, rather than telling your friend, "I did X to this guy" switch it up and say "He did X to me."

3) Observe the reaction and learn about yourself.  If your friend gasps and says "Oh my God, what a shit head" then congratulations, you're a douche bag!

For example, I once sent a guy flowers.  He never thanked me or acknowledged the gesture.  But he then went onto social media and made fun of me for sending him flowers.  That's a douche bag thing to do.  I gave him this challenge, and of course, he didn't have the balls to do it.  Because he knows that if he went to his girl-friend and said "Hey Janice.  I sent this guy flowers and he made fun of me on Twitter" she would be shocked and curse out this alleged ass-hole...  But if ever you're questioning whether you've behaved badly, this is a great way to test out whether your behavior crossed the line.

Posted by GrindrSurvivr at 10:15 AM