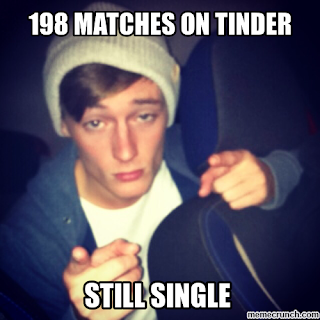 In theory, the Tinder app (or its gay counterpart called 'Surge') could be the answer to all of our problems.  It's clearly more relationship oriented than Grindr.  It gives you more than one photo, and you can link your Instagram account to it—even your favorite song if it’s on Spotify.  You can write more text than you can on Grindr.  And the Tinder app prevents you from sending direct photos to someone, which means it’s impossible to to get cock pics while you’re eating your breakfast.  (Thank God)

Also, for better or for worse, the "matching" function takes out a LOT of the drama that comes from Grindr.  If a guy doesn't fancy you at all, he'll just swipe left.  So, in theory, Tinder leaves you with relationship-oriented guys who clearly fancy you and are open to establishing a genuine connection...

Darling, you know what I'm about to say... 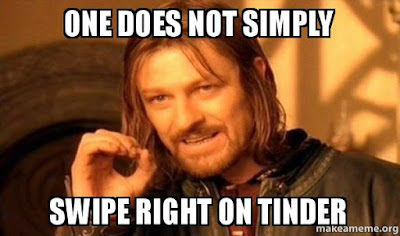 Who the fuck does this!  Seriously!  I wish I could track some of these people down and just scream, "WHY?  What the fuck is wrong with you?  If you don't fancy me, then fine, but then just swipe left."  And of course, the first few lines of my Tinder profile say exactly this:

Looking for someone who looks at my profile and says "Yeah, I'm up for grabbing a drink with him."  The whole matching/ignoring thing is silly... But if that's your thing, feel free to swipe left.

So I tell people, honestly, openly, I'm not here for your lame-ass swiping to get matches so you get a temporary ego boost.  You're a fucking loser if you have 600 matches and no boyfriend, because that's on YOU! But whatever, if I'm honest, that's only a temporary annoyance.  If a guy never responds to you after matching with you, it's annoying, but whatever...  The bigger problem is when people chat to you, then blank you or flake out.

What's far more frustrating is not just people who ignore you after you've matched them, but people who will chat to you literally for months, but never be up for a drink!  It's crazy!  I'm not saying that this doesn't happen on Gridr.  Time wasters are everywhere, and they're always happy to waste hours of your time with inane chat and giving you false hope that they're interested.  But the issue is far worse on Tinder than Grindr -- at least the slutty guys on Grindr know they want sex.  Rather than attracting people who are long-term relationship oriented, Tinder has just become a never ending cycle of confused over-grown children who don't want anything at all.

So I chatted with this guy on Tinder, and I asked for his number.  He gave me some lame excuse of he doesn't know me well enough.  I was like, whatever... So a few days after that, I unmatched him.  I wasn't trying to be rude, but he stopped chatting.  Literally yesterday (or a few days since I actually published this blog post), he messaged me on Hornet.  He started asking me all sorts of questions about how have I been, what have I been up to, bla bla bla...  I reminded him that we had chatted on Tinder, and he remembered.  So I asked him, "Are you finally ready to meet for a drink?"

(You already know what happened...)

So after wasting my time on Tinder, he was going to endlessly waste my time on Hornet as well?  Really?

Also... Literally yesterday (which was a Saturday)... I matched a really cute guy who worked in advertising.  We had instant Tinder chemistry, if such a thing exists.  He responded promptly; he asked me lots of questions; he said he was keen to meet up at some point.  We swapped numbers; we were chatting all day.  He said he was just relaxing this weekend.  I asked him, "Well, if you're not doing much tomorrow, maybe we could meet up for a drink if you want to."  (You already know what happened...)

I don't know if that was too forward or what.  But we had been chatting loads.  What's wrong with striking while the iron is hot?  Or he could just have said, "I've got plans tomorrow but what about next weekend?"  That takes ten seconds!  But don't chat to me endlessly, agree to meet me for a date, give me your number, add me on Snap Chat, but then disappear when it comes time to make a time to meet.  I asked you to join me at a bar -- not a wedding chapel.

So yeah... There is no refuge from the hoards of emotionally stunted, confused, time-wasting gays...  It's not just Grindr...  App culture in general has created a serious problem and no one is addressing it.  At least, I'm screaming "WAKE UP!"
Posted by GrindrSurvivr at 2:00 PM